Hello Everyone! Since I’m terrible at intros, I will jump right into my weekend. I weighed on Saturday morning and I had lost 1.8 bringing my total loss to 78.4. I can’t believe how close to 80 I am. This was an especially good week because that loss brought me down another point so maybe that will add some momentum. The point that I’m losing also may help make up for the ridiculous amount of food I ate this weekend. I never thought that I would say this, but I will be glad when football season is over so I can stop slipping up on game days. I seriously doubt that one less point will help me totally recover from the damage but I am also changing up my exercise this week…I’m working a little harder and might have a new project to report on soon. Maybe the combination of exercise and less food will help me get closer to 80 this weekend. I really don’t expect to lose much the next couple of weeks because I sort of allow myself to let go on Halloween…I don’t think anyone would want to be around me on Halloween if I couldn’t enjoy it to its fullest. Jordan and I nailed down our primary outfits for Halloween this weekend and I have to say, I am getting more and more excited. We just need a few accessories a piece and we will be ready to go. I am still a little behind on my work costume but I made some progress on it last night. I plan on recruiting my mother to help me at some point. I also put up some Halloween lights on our deck last night to one up the neighbor…I am not kidding…I rarely see these people but they just happened to be outside when I did it and she looked at the lights for a whole minute…whispered something to her daughter and wrote something down. I guarantee that she has something else up her sleeve…but don’t worry…I haven’t pulled out the strobe light yet…there’s still time.

So, this weekend was Alabama’s homecoming game against Ole Miss. I posted a few pictures from the festivities and the game… 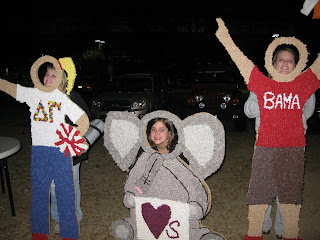 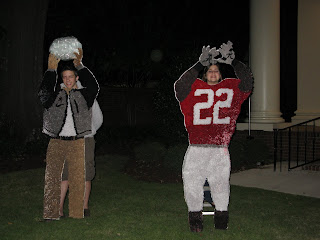 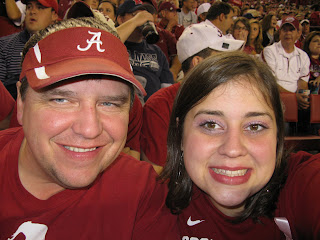 We won but it was an ugly win…we play Tennessee this weekend and I just found out that me and dad are going! I’m excited! My goal over the next few years is to go to a game in all the SEC stadiums. I have quite a ways to go because the Tennessee game will only be my 3rd SEC stadium…but you know…one step at a time. I really hope Alabama starts to play better because…it will only get tougher after Tennessee. LSU and Auburn are no joke and now it looks like we might even have to be concerned about Mississippi State…so…they need to get their ducks in a row. 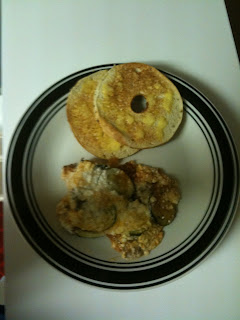 This was called Beef and Vegetable Cheese Casserole which I personally didn’t think was a very creative name but whatever. I know it's hard to see because it's dark...I also made toasted everything bagels with spray butter to go with it.This casserole has 3 layers…the bottom layer is a mixture of sautéed beef, tomato sauce, onions and garlic. The middle layer consists of roasted tomatoes and zucchini. The top layer is a mix of fat-free cottage cheese, egg yolk, cheese, salt & pepper. After you put it together, you just bake it. I have to say that it tasted great. I wasn’t sure because of all the fat free stuff but the beef, tomato and cottage cheese mixed together gave it a lasagna-ish feel. Even though I liked it, I probably won’t make it again because just that tiny portion is 7 points. That’s way too many points for too little food. If I do try to make it again, I may use turkey instead of beef.