When we arrived in Tennessee Saturday afternoon, my Dad goes, “It’s like it’s Halloween every day here.” When he said it, there was a tone of disgust. I have to say I don’t agree with his tone because I would LOVE it if it were Halloween every day but I did understand what he was saying. There is something about seeing a sea of about 80 thousand people all wearing a fluorescent orange color…it’s almost blinding really. Dad and I had a safe trip to and from Knoxville which is really miraculous considering the hostile environment you experience wearing crimson around Tennessee fans and also the giant screw I discovered in my tire yesterday. As you may have heard, Alabama had an awesome win in Rocky Top and we had an even better time singing Rammer Jammer to the Tennessee fans that were left after the game. Someone offered to take a picture of me and Dad… 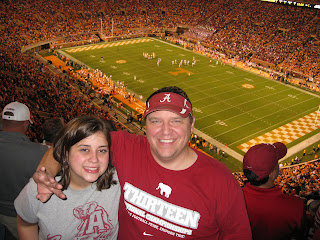 I thought it was a pretty good one! It was quite an experience. Neyland Stadium is only the third SEC stadium that I have been to on my SEC stadium journey and now that I’ve been…I don’t think I will be needing to go back anytime soon. The Alabama-Tennessee game is intense to say the least and when they were keeping it close the first half, I was a nervous wreck but it was very apparent in the third quarter that we had the game in the bag.

I weighed Saturday morning before we left and I didn’t lose weight…I was pretty much the same as the week before…there may have been an ounce difference but I didn’t even bother recording it. I shouldn’t be surprised…I’ve been completely off Weight Watchers on the weekends. I also ate like a mad woman this past weekend…I’ll just say there was a Steak ‘N Shake Butterfinger Milkshake incident AND I ate at a Denny’s in nowhere, Tennessee at about 1 am Sunday morning. I didn’t feel great Sunday night because of all of it but I’m back on track now. I know that I will be cheating this weekend for Halloween and then the week after next I go to Vegas. My goal is to maintain for a while and I think if I’m good during the week and continue exercising, I should be OK. I WILL MAKE IT THROUGH THE HOLIDAYS! 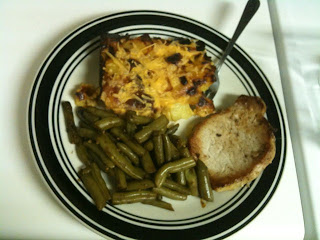 I made a pork chop and green beans to go with Au Gratin potatoes which was the actual recipe. My mom made a non-Weight Watchers Au Gratin Potato Dish on Sunday night so it was interesting to compare the two. My mom’s were obviously more buttery and cheesy but I have to say, mine were not bad at all. You use fat free milk and cheese but you use a half tablespoon of butter and Yukon Gold Potatoes and it turned out to be nice and creamy and tasty. The only problem I have with potato dishes is that if they are baked in the oven, they take FOREVER. I am very impatient and these potatoes took over an and a half with preparation and baking time…but the dinner was filling and I enjoyed it.

Friday, I will definitely post pictures of my work costume and let you know for the 300th time how excited I am about Halloween. We are having soups and chili Friday at work and I’m bringing a sandwich shaped like a snake that my mom is going to help me with. I am going to try not to be terrible on Friday but I know me and I know that isn’t a safe bet.

“It's close to midnight and something evil's lurking in the dark
Under the moonlight, you see a sight that almost stops your heart
You try to scream but terror takes the sound before you make it
You start to freeze as horror looks you right between the eyes
You're paralyzed

You hear the door slam and realize there's nowhere left to run
You feel the cold hand and wonder if you'll ever see the sun
You close your eyes and hope that this is just imagination, girl!
But all the while you hear the creature creeping up behind
You're out of time