Alabama clenched the SEC West Saturday against LSU and it was pretty awesome. I know that I talk a lot about football on a blog that is supposed to be mostly relegated to weight loss but I am excited because Alabama has a shot at the national title for the second year in a row. Last year we...well...choked in post season but it looks like we are going to get to try again at Florida! I am so pumped that I actually spent my lunch break watching and re-watching the last few minutes of the Bame/TN game from a couple of weeks ago. Because of school, I am going to miss watching 2 whole games. I am going to have to find a hiding spot Saturday to watch the Mississippi State game though because that one should be a little more exciting than the UT-Chattanooga game that is playing the day I graduate. I would honestly like to see Bama play the Mocs because Chattanooga is my hometown but I would rather graduate!

Phew! Enough about football. I am down 48 pounds! I am so close to 50-yet so far away. I don’t think I will get to weigh for two Saturdays and when I DO get to weigh...it will have been after 10 days of not being able to count points AND Thanksgiving so I might end up being a little bit further from losing 50 pounds then I am now but I plan on getting right back into the game when I get back from Louisville.

Yesterday, I was experiencing residuals from the LSU game and told my brother that I wanted to throw the football with him. Well, I always throw as hard as I possibly can and I would say I probably get it to him about 35% of the time. I don’t have the best arm strength. You probably already know this if you read the blog about the hello/goodbye arm. I am not terrible at catching unless he throws to hard. I swear he nearly broke my hands five times. I started to feel confident so I decided we would do a whole play. I told him to pretend we played for Alabama and that we were at practice and I would be Terrence Cody: 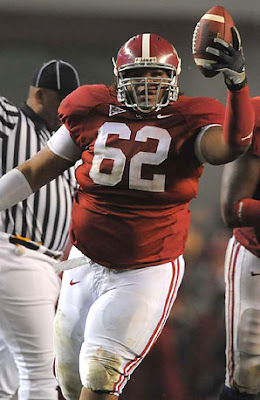 And he would be Greg McElroy: 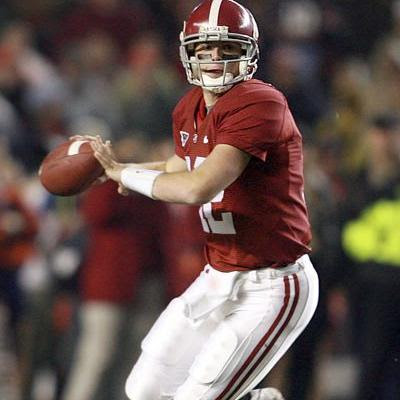 I did this to imply that he should let me tackle him because CLEARLY McElroy is no match for Cody. Being a real boy, he didn’t let me just tackle him...he made me chase him all over the yard...when he finally LET me catch him...I couldn’t bring him down. I then (for some stupid reason) let him try and tackle me...he ran right at me and brought me to the ground. I just laid there for a minute. It wasn’t THAT bad but I couldn’t muster up the energy to get up. He of course thought it was hilarious. I said, “I’m too fat and old for you to do that.” Then he said, “You’re not old.” Punk. I remember now why I just WATCH football. I sort of felt sore last night but knew that today would be the real challenge and I was right. My arms feel like someone made me hold a 25 pound bucket of water in each hand above my shoulders for six days and my neck and legs ache pretty bad too. The good news is...I got some exercise.

I think that is all for today. My Dad sweetly offered to take me to get some luggage after work as a graduation gift. I don’t really have any and I have been using theirs every time. Frankly, I think we could all use a new suitcase before we go to Paris...or at least it sounds like a good reason to get one. Dad and I are going to dinner first so it will be fun! I have a lot to do before Friday but in mind and spirit and I am SO ready to go.
Posted by Heather Wyatt