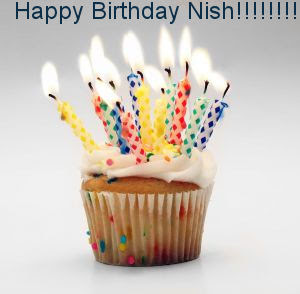 Yup. There is another birthday today. That’s why we call it birthday month. 2 down and 2 to go I think...I hope you have a wonderful birthday Nish. Nish is also trying to stay on the diet wagon and I have to say I know how hard it is to NOT eat cake and other birthday treats when they are right under your nose...but like I told my mom at lunch...everyone deserves normalcy sometimes. I don’t think I will EVER allow people to eat cake for my birthday and me not have any...that’s just wrong.

I will be the first to admit that I have gone completely crazy already this week...tomorrow is be REALLY good day because there is no reason I need to cheat. It will make me feel better about myself to be on track tomorrow.

I went into Weight Watchers today to get a 3-Month journal. These journals work for me because they have a tracker and tips and recipes and what not. I HAVE to write my points down. I am terrible at math so I know I couldn’t add them up all day in my head and if I don’t write it down, I don’t have a point of reference to how many points I have left. This works well because I am an obsessive list taker and I write everything down. Anyway, they were out of them. This is not the first time this has happened. I swear if I gain weight because I don’t have my journal (my diet security blanket), don’t think I won’t try to get them to refund me a month.

I guess this brings me to my rant of the day:

I CAN’T STAND FOR PEOPLE TO BE OUT OF THINGS.

Like today, I wanted FIG. I’ve talked about them before...I used to love them but since I’ve been on Weight Watchers, there is really only one dish I can eat there. I had every intention of being bad there during lunch but they were sold out of their daily special. Again, this has happened here before. If I were running a restaurant with specials and there were several times that I ran out of it before the lunch rush was over, I would think to myself that I might need to...I don’t know...MAKE MORE.

It’s infuriating. There is this Burger King in town that I just eventually stopped going to. They were always out of buns or meat or some fast food staple. I think the straw that broke the camel’s back was when I took my brother there one day. They used to have a loaded potato burger where they just piled bacon mashed potatoes on top of a whopper...my brother loved these. I took him there and there was a sign that said they would only accept exact change. I said, “So, you won’t take my card or this $20 bill?” and the girl goes, “Nope.” I said...well alright then...I think I must have miraculously had exact change (I don’t remember) because I remember ordering. I said I wanted the loaded burger and the girl goes, “We out of loaded.” I said OK...I ordered something else...again...I don’t remember the details but I asked for extra ketchup or for there to be ketchup in the bag and the girl goes, “We out of ketchup.” So, I said, “FORGET IT!” I drove around to the window, stuck my head out and yelled, “BOOOOOOOOOOOOOOOOOOOOOOOOOOOOOOOOOOOOOOOOO!!!!!!!!!!!!!!!!!!!” as loud as I could. Ugh...it irritated me...they never had ice cream and they were ALWAYS out of stuff...so I was like...I’m never going there again.

Anyway-that’s just really on my nerves today...I hate when people are out of things...order enough!

Alright, I’m done...I plan on having a great night and I hope you do to!

“You don't want none I hustle for my muscle and you look
Weak son (real weak) yea!...I'm goin’ for all that I can get
Kickin’ at the top cause I'm too legit to quit...sing!...