Well, HELLO FRIDAY! I’m always excited for the weekend. What’s even more exciting is that I have a pretty low key weekend planned. I think I will be able to relax both Saturday AND Sunday between the hours of 11 and 5 each day. If I play my cards right, I might even get a little caught up on TV or lay in bed or download music or something like that! I love being with friends and family but I can’t tell you how much I have been wanting to just sit around. 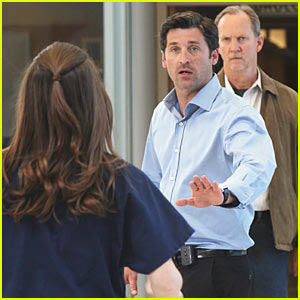 Oh my goodness. I don’t know how many of you watch Grey’s Anatomy but it was RIDICULOUS last night. I was 2 episodes behind before the finale last night so I figured I wouldn’t see the 2 hour show for a couple of weeks but I just had this feeling like I really wanted to see it. The previews kept indicating that someone was going to get shot. So, at about 7, I decided I would catch up on the 2 I was behind on so I could watch last night. I won’t spoil it in case you haven’t seen it but it was CRAZY. I mean, I thought it would be kind of predictable but the first 10 minutes were totally unexpected and made the whole show completely suspenseful. It is the best episode of not only Grey’s but of any television show I’ve seen in awhile. If you haven’t watched it, stop what you are doing and go watch...seriously.

Now that I have sufficiently geeked out over Grey’s, I will move on. I looked today and I’m about 5,000 steps behind in my 130 day goal. I have created a mini-plan to catch up this weekend. It will require a little more walking on my part but if I’ve divided the steps I’m behind on between today, tomorrow and Sunday so if I do what I’m supposed to, I will be back on track by Monday.

Also, I don’t know if you all remember or not but I play trivia a lot...I used to play every week but my team faded for a little while because the trivia goes in seasons. There is a certain amount of time that you have to qualify for sub-state regional’s. We knew we weren’t going to qualify so we took a break. It’s tough to lose every week AND it gets expensive. Since my team had gone on a hiatus (we plan to make a triumphant return the next go round), I have been playing with the T-Town Curling All Stars (mostly comprised of me, David & Nish). Well, we qualified for the sub-state competition and Sunday we are going to be playing in hopes of advancing to the State or Regional competition (I’m not sure of all the levels). I think the top 12 from this one will advance. It’s going to be at T.G.I. Friday’s. I have to say I’m pretty excited because it will be my cheat day and I LOVE T.G.I. Friday’s so it should be a fun time. Wish us luck!

I am definitely not weighing in tomorrow. I may peek at the scale in the morning just to see where I’m at but I am more than sure I’m going to need another week to get rid of the junk. I have only had one misstep since Sunday so I think that’s pretty good considering I spent so many days off the wagon.

Have a great weekend!

“And I'm winning you with words because I have no other way
I want to look into your face without your eyes turning away
Last night I watched you sing because a person has to try
And I walked home in the rain because a person can not lie.” Gray or Blue-Jaymay
Posted by Heather Wyatt