How's That For A Segue? 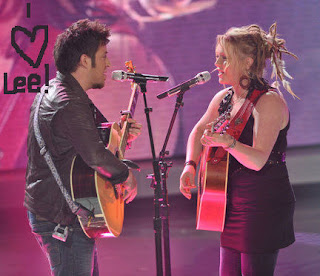 Tonight is the night of the American Idol Finale! I have to say, I’ve been more excited about it in the past. This was NOT the best season of AI...it may have even been the worst. There were some pretty bad people that made it very far. I just don’t feel that invested in the show this year and I don’t imagine that it will be better when Simon leaves...he is one of the big reasons I like the show in the first place. Having said all that, I am still excited about the finale. I think that the two left, Lee Dewyze and Crystal Bowersox, are the ones that should be the two in the finale. I have liked Crystal since the beginning. She is a talented musician and I like her style of music. I have a few complaints about her though. First, I don’t think she has shown much range in her talent. I think that her performances have become predictable. Second, she’s got kind of an obnoxious attitude. She was argumentative at times with the judges (huge pet peeve of mine) and has a certain arrogance about her that rubs me the wrong way...it’s not a total turn off but sometimes it’s annoying. Lastly, I don’t know what it is but sometimes her voice makes me cringe. She can sing and play but sometimes she screeches...that’s just me. So, my vote is for Lee. Yes, there are times when he is “pitchy” but he is ADORABLE, a talented musician, seems to be really humble and sweet and his raspy voice is hot! So, even though I think Crystal won the show last night, GO LEE!!! I voted like crazy for you!

As you can tell, I already have my plans for the night...I am excited because I am getting VERY close to being caught up with TV. I’d say one or two more afternoons of dedication and I will be where I need to be. That will give me time to watch season 2 of True Blood AND maybe I can FINALLY go back to watching my Netflix movies so I can stop the process of pretty much donating to their business. All of that makes me very happy.

While the simple things in life can make me happy, there are many things that make me UNhappy. This may appear to come out of the blue but I have heard the word “obese” used a lot lately in news stories. I just wanted to briefly tell you that if you are struggling with your weight, please don’t cloud up your mind with labels. According to Wikipedia, there are three levels: pre-obese, obese & morbidly obese. From what I understand, each of these labels is determined by your Body Mass Index which is the connection between your height and weight. Look, most people who are overweight don’t know what their BMI is...they know that they aren’t happy and that they feel isolated and unworthy (I should note that not ALL overweight people feel this way). They don’t see who they are in the mirror...so if you are that person...I know I have been...please don’t get into the hype of whether you are obese or what your insurance chart says you should weigh. When I went to the doctor a few months ago, I had lost a bunch of weight and I was looking to set a goal. At Weight Watchers, you set an ultimate goal so when you reach it, you can become a lifetime member for free. I have yet to set one because my doctor told me that if I lost about 50 more pounds, I would feel like a new person and that I shouldn’t go by what Blue Cross thinks I should weigh...because that would be around 120. That’s a completely outlandish goal. I think the point I’m trying to make is there aren’t many people that aren’t considered overweight (especially in Alabama). I am sure that I am medically obese with or without the 60 pounds I’ve lost but if I let that determine how I feel about my weight...then I will be in big trouble... I know this was completely out of left field and I also know that the medical consequences of being overweight are serious so I’m not suggesting that you completely ignore all labels...but if you are trying...don’t let your BMI make you feel bad.

I have to laugh at myself because that was sort of a pitiful attempt at a transition on my part...if you ever try to switch from American Idol to obesity...trust me...don’t try it...it looks odd. I just get so irritated by the exploitation of overweight people in the media, especially in the footage of fat people they show. In lieu of song lyrics today...I am ACTUALLY going to post one of my poems. I’m not going to lie...it makes me VERY nervous but it’s a funny one (I apologize in advance for the curse word) and it seems fitting for the subject matter. Hope you enjoy and have a great night!

I saw my ass on the news last night.
The anchor spoke of a binge eating
epidemic and then the clip appeared.
Cocking my head to the side
and making my eyes focus,
I finally recognized the familiar shape.

Almost like a heart, it bobbled,
a teeter totter unaware of the camera.
This isn’t good. I said this to myself.
I put down the cookie dough.
I predicted this would happen one day.

At work today, I walk crablike,
back straight up from side to side.
No one has asked my ass
how it feels to be famous
and I hope no one ever will.
Posted by Heather Wyatt