You Say Frittata, I Say...Frittata!

What a busy morning! I have a busy afternoon planned too but I wanted to take a couple of minutes of the lunch hour to tell you about my Feta & Tomato Frittata that I made last night: 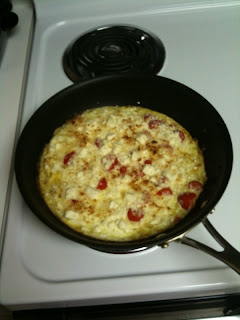 Looks good huh? Guess what? It was! It was so easy too. I got home and was putting it on my plate in 25 minutes. I think next time I make it, I will add ham or something because I like to have meat...I know it’s weird but I somehow feel cheated when there isn’t at least a little meat in my meal.

Don’t let anyone ever you tell you that eating out is cheaper than cooking in. I know that ingredients can be expensive sometimes but that Frittata was supposed to feed 4 (not 1 like it did last night) and that means it only cost right around $2 a serving....and that was on the upper end of ingredients because Feta cheese & Grape Tomatoes are kind of expensive. It’s especially cheaper to eat in if you have a family.

I am really enjoying this 1 recipe a week thing. I mean, I know I’ve only done 2 so far but I’ve found that natural, fresh and sometimes organic ingredients taste so much better and there is something nice about knowing that you’ve prepared the food yourself. I also know that they charge way too much for people to eat organic products and that it is much more convenient and inexpensive to get processed food but if I can, I like to get natural things. Don’t get me wrong, my cabinets are full of processed foods because like everyone, I’m busy and need foods to grab but when I’m cooking...I like to know that for a few dollars more, the food is natural, no cruel and unusual treatment was placed upon the animals and they aren’t shot up with steroids or genetically modified. I wouldn’t call myself an activist or anything because like I said, I like a hotdog as much as the next girl (probably more) but here and there, I pay a couple extra bucks for the good, pure stuff.

I haven’t picked out a recipe for next week but I plan on continuing cooking.

I am so tired today...I think I’m worn out from all the walking and I’m not exactly sleeping that well...maybe I’ll go to bed early tonight (after I watch Idol of course).

I hope you have a great afternoon!!!