If you would like to help in the efforts for Haiti, I think the best site to go to right now is www.whitehouse.gov. If you click “Learn More” from the home page, it provides several ways to send help including text, phone, mail and online payments. I think they have already raised over a million dollars just on their text campaign alone. I texted mine...which kind of made me nervous...I’ll let you know if anything screwy happens...but it is an approved way by the government and they would never steer us wrong...right? Lol...anyway...provide help if you can!

Trivia didn’t go so hot last night. I think we must have been a bit cocky after our last time playing when we won and also...the questions were really hard. Whatever. It was fun. I am so tired today for some reason. I am convinced that it is because I didn’t exercise this morning. Every time I skip the elliptical I usually end up drained the whole day so I’m thinking there is definitely a connection.

My productivity level has been pretty minimal lately. I have actually increased my work production but as far as cleaning, reading and writing...well...it’s a downward slope. I keep staring at my bathroom counters...morning after morning thinking that I need to clean them and then when I come home, I spend the majority of my time catching up on TV. I have to say that I am VERY behind on TV. After a week in Kentucky and 3 days in California and spending all of November preparing for graduation, I got VERY behind on all of my shows and even though it seems stupid...it really stresses me out. It just proves that I am invested in far too many shows. On top of that, American Idol is back on. I need to spend all day Sunday catching up on TV so I can start investing my time in more important things OR so I can find something else to blame my procrastination on.

I am going to the first home gymnastics meet on Friday night here in T-town. Don’t get me wrong, I like gymnastics but I have to say that I have quite a “large” problem with the size of the seats in the coliseum versus the size of my behind. There are many cases these days where seats don’t provide NEARLY enough space for your average, overweight American. Recent examples would be airplane seats, stadium benches (particularly at the Rose Bowl) and the seats I will sit in Friday at the gym meet. I have to say that before I started Weight Watchers, the battle I faced each time on an airplane was sort of embarrassing. I never needed a seat belt extension or anything but it was not comfortable. It is much better now after I have lost some weight...I even have room left to pull the belt tighter. As far as sporting events go...I’m not sure if as a nation we are just like...double the size we were when all of these stadiums and coliseums were built but it sure seems like the seats in these places planned on anorexia really taking off. It is especially bad for me in the coliseum. I think it is because the chairs have arms and maybe they only planned on men going because...I have hips...like sizable ones and it’s a pretty snug fit...it almost hurts to sit in them. Anyway, the goal of this confession of mine is to raise awareness of the poor fat people that have to get two seats or belt extenders on airplanes or those that have to limit their sporting event intake and also to raise awareness of the fact that as a nation...we need to lay off the fast food because at some point, these seat sizes were meant for the “average” sized human. Just saying.

I am excited to see Jordan this weekend and to do some strategizing with him and my folks on our upcoming Paris trip (which I’m very excited about so I included a pretty picture). Sounds like a good weekend to me! 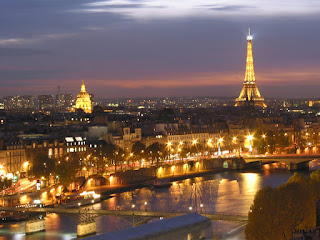 "I don't think you're ready for this jelly." Bootylicious-Destiny's Child
Posted by Heather Wyatt