Well, it’s 2010 y’all! Do you feel different? Me neither. First, I would love to thank my WONDERFUL friend Nish for following my blog. I found out that she was reading pretty regularly and I may or may not have told her she had to follow me officially or she wasn’t allowed to read anymore. Shameless, I know, but when it comes to the blog...it’s more about the numbers for me. I am mostly kidding but there is a part of me that rather enjoys seeing a new follower even if they are my friend already or even if I had to set up the account for them which is where at least 2-3 of my followers came from. My old pastor used to say that numbers didn’t matter. I call BS. Of course a pastor of 20 congregants would say that. He would say that all the time and yet feel the need to say where everyone was every Sunday that didn’t show up. That’s part of the reason I don’t go there, in such a small church, if you aren’t there...people know...and they call you and then suddenly the phrase, “I didn’t freaking feel like coming” doesn’t sound like the best thing to say and you end up lying flat out and make up some bronchial disease and then they put you on the prayer list. Not that I have ever experienced that before but...it could happen. Also, sorry for the run-on sentences...not just in this paragraph...but in every blog...it’s how I roll.

I brought in the new year with my people. It wasn’t the most exciting new year’s eve because I was tired from trivia night the night before and frankly, it was way too crowded at the bars...but I was with Jordan and Whitney and that made it great! I also went to a birthday party on Saturday night (where I called Nish out for not following me) and it was SO much fun! The house looked amazing and the hostess was right on with food and such. Also, there was karaoke and it was pretty hard to tear me away. There is a slight chance that I busted a pretty awesome rhyme at the end of TLC’s “Waterfalls.” It was fun...at least for me...

I listed some resolutions on my last post and I think I will stick with those but I would like to add just a couple more immediate ones that came to me on Sunday. I would like to make my first resolution quickly as it pertains to my safety while on my trip to Pasadena. I want to resolve to be extremely careful...so as to not give my mother a heart attack and I want to come back in one piece...boasting a national championship of course. I would also like to stop saying that I hate people so much. At this present time, there is only one person in my life that I use that word for excessively...but admittedly...I mean it. Every time I say I hate something and I’m around my mom she goes, “Now, we don’t say hate.” That phrase alone is worth giving up the word. But seriously, I say that I hate people and things a lot and with the exception of the person I mentioned above...I don’t really mean it. There is already enough hate in the world...so if you hear me say it...don’t say anything...I will make a mental note...you wouldn’t want me to get upset. Also, I’m working on not actually HATING the one person that I do...but I won’t make any resolutions regarding that...I want to at least have a chance at keeping the resolution.

It is extremely cold here. I mean, it’s not in the single digits but for Alabama, it’s freaking frigid. I took a picture of an icicle hanging off of someone’s car at work. I also posted a picture below of me in my very warm penguin hat that my parents got me. One of the balls fell off already but hopefully my mom will fix them for me (sorry if you have already seen the pic on facebook). I love the cold weather but I have to say that the wind has been a bit much for me.

I guess I should mention food...that being the purpose of this blog and all. I have been a good girl today. I think, once again, that I have confused the crap of my belly. I ate a hamburger and mac & cheese last night. It was my brother’s birthday. My stomach has not been right all day. Then I had a very sub-standard salad for lunch...the lunch date was fun but the food reminded me strangely of being on a...diet. Blech. I get one more rendezvous with yummy food and then THAT’S IT! Well, at least until I go to Paris. Mostly, I think I’m ready to be back on the bandwagon...I was just getting used to it...and people noticing the weight loss ain’t too shabby either.

Bundle up out there-I did! 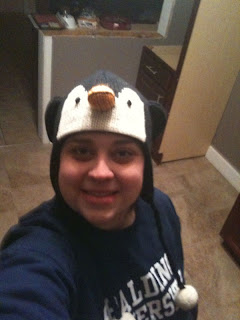 Also, I'm in a song lyric posting mood so from time to time I may put a lyric or quote at the end of the blog that gives a slight indication of my present mood.