Scales from the Crypt.... 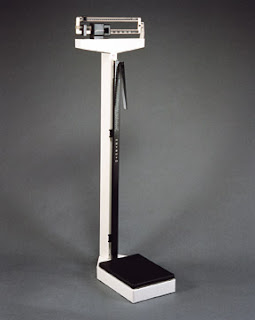 AHHHHH!!!!!! There is NOTHING more frightening to me than a scale. Before I started Weight Watchers in the summer, it had been probably 3 years since I weighed myself and looked at the results. I just knew that it would make me miserable and self-loathing. Even when I went to the doctor, I would be kind of nasty with the nurses about weighing and I would either NOT weigh or BEG them not to tell me what it said. Another thing they did was start off too low on the scale so they ALWAYS had to move the thing over a notch. I kind of thought they did it on purpose sometimes. I even broke down in tears in front of my doctor one time because I knew what I needed to do to be healthy especially since I have an underactive thyroid and a family history of diabetes...but I just didn’t want any more challenges in my life I guess. I was adamant about not weighing. I knew that I had gained all of my weight back from my Atkins Diet excursion but I had no idea that I had gained it all back...twice. I think in the back of my mind, I probably knew, which is why I didn’t want to weigh. Needless to say, when I finally got up enough courage to go to Weight Watchers...I knew what was coming. I had an estimation in my mind and I have to say I thought I was overestimating but I ended up hitting the nail right on the head. It especially was scary because it was someone else weighing me and writing it down.

The scale is a little less intimidating now because that initial number has gotten much lower and I try not to let the amount I weigh trump the amount I’ve lost. I also try not to weigh during the week at all because if you only give yourself 1 or 2 days to gauge weight loss, your results probably won’t be very accurate. I think my refusal to weigh had less to do with the number and who would see it and more to do with how it would make me feel about myself. I knew that once I saw that number, I would be forced to do something about it and I wasn’t ready and/or willing to change my life. I am now though. Sometimes, you aren’t ready...you lie to yourself and try to justify your actions...all indications that you aren’t fully devoted to losing weight. In my opinion, if you aren’t fully committed to losing the weight, you are going to feel THAT much worse when you mess up. I feel a little bad when I don’t eat the right thing but I know that I am 100% dedicated right now. I mean, that could always change but in this moment, I don’t want to quit until I get to my goal.

I brought this up because I’m going to the doctor today and I’m actually a little excited to weigh so he can see how far I’ve come. I can’t wait to tell him how I’m feeling and the progress I’ve made. There won’t be any tears today. Really the only question I want to ask him is what he thinks an appropriate goal weight should be for me. Listen, I am never going to be 125 pounds...I don’t care how much “they” say I should weigh for my height. I want a reasonable, healthy goal that is right for me and makes me look and feel great. I know that it will be a little scary because I’m nowhere close but at least I will know what I’m aiming for. Again, I’m trying to focus on the number of pounds I have LOST and NOT the number of pounds I weigh.

Wish me luck at the doctor today!!! I hope you all have a wonderful afternoon!