Since I so intelligently figured out how to put pictures on my blog yesterday(I realize most people can do this within 5 minutes), I have the urge to go back and put pictures all in my other blogs. I decided that wouldn’t be beneficial to anyone though since those times have past but I assure you that I have been tempted. So...tonight is Trivia Night and I am bringing the ULTIMATE reinforcement...my mother. Her more seasoned trivia skills are sure to bring us the victory we’ve been hoping for...I can feel it. I just hope that the acceleration of crude behavior that happens when I’m around my friends doesn’t make her ashamed to be my mother. You should see the look she gives me when I burp out loud in a restaurant. It’s seriously the most depressing look EVER. I know that the words “where did I go wrong” run through her mind over and over until I shrug and go “whoops?” This trivia season is almost over and despite the fact that I know we won’t be advancing to the semi-state level, I still want to go out with a bang.
I was thinking today about how there are many times in my life where I back down or do things to make people happy. This doesn’t really sound like me because I am confrontational and can be quite a pill sometimes but I also HATE when people are mad at me or each other for that matter. It is very unsettling for me to think that someone I’m close with is mad at me or needs me to do something for them that I can’t provide. So, I had a boyfriend and frankly, because of him I have some very jacked up trust issues. He may read this and call me and be upset but if he doesn’t know these things as truth then I question his mental stability. I dated him at a very young age and to be honest I think he was very controlling and manipulated me. He may not have done this intentionally and I realize I’m not perfect...this blog is not going to be an ex-boyfriend bashing...I have a point (try as I might, I will not be a man hater). He never said or did anything right. He cheated, lied, and flirted but I stayed which is why I don’t think I was really in control of what I wanted. Randomly one day, I decided I had endured enough and ended it. Because of his need to feel important, he had a girlfriend within a few weeks. Despite the hurt I felt then, his new girlfriend and present wife happened to be the best thing that ever happened to me because that made it official...the five years I spent hoping that he would change had come to an end...for good. We still went to church together and I spent a lot of time trying to be the more mature person. I would do this for 2 years. I remember the Christmas after the break up, they (as in the ex and his new girlfriend) gave me a present in front of the entire youth group to open. The book was “Approval Addiction” by Joyce Meyer. 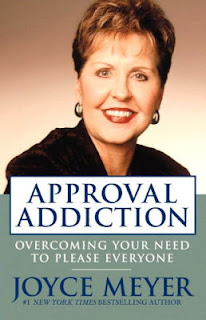 He was giving me a book in front of everyone to help me get over the fact that I try to please everyone. A book whose descriptors are like “for people who are desperate to fit in.” I can’t tell you how angry I was. This is how he operated. Who does that? But you know what? I am addicted to approval. I stayed in that church, a church where I was not happy for 2 years so I wouldn’t let anyone down. The idiot was right...for once. I don’t really care about fitting in but the part about me needing to know that people don’t have ill feelings towards me does matter. I will never read the book. I’m sure it’s just dandy but I’d be pissed the whole time I was reading it. It was like he knew he was right about this and he chose to call me out about it in front of everyone. I didn’t go to their wedding and I remember my old pastor totally judging me for it. WHO GOES TO THEIR EX-BOYFRIEND OF 5 YEARS WEDDING? Seriously! How awkward for the bride... Anyway, I had to get out. I had to leave all (with the exception of 1 or 2) of those relationships behind because they weren’t helpful to me in anyway. No matter what you do, you can’t please everyone. You can try but you may end up stuck 5 years later wondering where your early 20’s went and realize you can’t get that time back. I can’t get that time back. I was talking to Stacey the other night about those days. I said, you know...I had fun...but I don’t miss them. I am so better off surrounding myself with people who don’t try and upstage me or belittle me every time I’m around them. Again, despite the fact that I may sound upset...I am over that relationship but it took me a LONG time. I still feel the effects and it isn’t just him...it’s that whole period of time. Sometimes, you just have to give up the good fight. I am so much better now. I blamed him for my weight gain for many years but I can’t use it as an excuse anymore because the only person I need to please...is myself...as cheesy as that sounds...and it does sound cheesy. At least I didn’t type the lyrics from “Defying Gravity” from Wicked like I REALLY wanted to.
“Wind Beneath My Wings” is TOTALLY on my shuffle right now. I think that is hilarious. My Windows Media Player knows me SO well...I appreciate that. I wish there were a soundtrack to my life. I might make one...it would take me forever. Right now I will just settle for that Shania quote that you love Jordan (I know it’s tough to narrow that down)...it’s about self-esteem and dreaming...why don’t you pump that out on the comments and bless everyone this afternoon.  OK. TRIVIA. HERE. WE. COME.
Posted by Heather Wyatt