If only people just did what I told them too...

So, because my Mom knows the Doobie Brothers, Leatherface and Homie the Clown from In Living Color, we made a much better showing at Trivia last night. After the first round, we were in first place. We didn’t do near as well in the second half and our chance at the title went away. You know what though...we went out there and did our best. We need to get a sports nut. That is what always kills us. Having my mom there was fun and we all had fun so it doesn’t really matter if we win. It does matter if we win because I am very competitive but since we haven’t come close to winning yet, the sting of defeat gets less and less brutal each week. I think I’m going to decorate the house for Halloween tonight. I’m pretty excited. I just broke one of my nails off. Ooh...that makes me mad. It was weak because I still pick at them and it peeled off. I didn’t even get to bite it. Whatever, I have to learn to leave them alone but it’s hard because I can see them on my keyboard all day looking very bitable(not sure if that’s a word).
Yesterday, I went all deep encouraging people(and myself) to not spend their life trying to please the people who aren’t beneficial to them. Well, I also have to realize that people don’t always do what you want them to do. It would be a perfect world if everyone listened to every suggestion I made and said the right things but I don’t anticipate that ever happening. I think the best example would be my brother. Overall, he’s a good kid. He has a good head on his shoulders and cares about other people. On the other hand, he is fifteen and his hormones make most of the decisions for him lately. I often set up traps for him hoping that he will do the right thing and it never works. When I stayed with him for a week he didn’t feed the dogs, he always tried to stay later than he should, he left the dogs out for hours and the back door unlocked and was not as grateful as I’d like for the bowling trip and concert I provided for him. I know that he isn’t doing these things because he’s bad...he’s just 15 and absent minded and the only thing he can think about is his relationship with his girlfriend. I guess turnabout is fair play because my mother always expected things from me that I didn’t do and it infuriated her. I am very close with my brother. I worry about him SO much...sometimes it makes me physically ill because it literally felt like he went from kid to driving teenager in one night. The point is, it’s not fair of me to test him and expect him to do things when I don’t even ask him. I have to learn to be direct. I also find myself wanting people to do things like me because those things work for me and that isn’t fair either. Different things work for different people and I just need to calm down. Sometimes people don’t believe the same way I do, exercise or diet the same, agree with my politics, like the same movies or music I do and sometimes that frustrates me. I don’t know why I am so high strung or where I get it from but I am working on it.
So, the lack of Diet Coke has been ok but I really wanted one yesterday and just now when I was thinking about lunch, I was planning on stopping to get a Large Diet Coke from Chick Fil A but then I just realized I couldn’t and I have to say...that was a pretty big letdown. I will say that the lack of caffeine has helped my sleeping situation. I also started my new book by Paul McKenna called “I Can Make You Sleep” so I look forward to having complete and restful sleep very soon. I have a lot to do this weekend for school. I can’t wait until November 22nd because the deadlines and papers and revisions will all be done and I will have a masters. I will miss the people but I am so excited about having a much needed break from school. I posted a picture of me and my brother David below. It’s a few years old but a fun memory...he was younger...he looks like a young man now. So, I wanted to use a picture where he still looked like a kid. 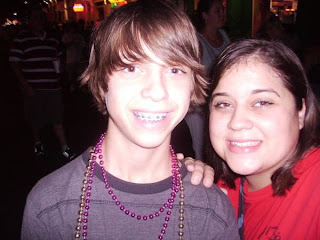