It's OK to be childish sometimes!

I am feeling a bit less cranky today. I’m not sure why, I got no sleep last night but my spirits are up a little bit. Our trivia team made a pretty poor showing last night but it was fun anyway. I consider this all practice because when they start a new cycle of trivia...I want to be ready. They go through a several month period and keep up with your scores and then have a semi-state qualifier and then a state championship. It’s a pretty nerdy and fierce competition and next year...I want to win. Since we sucked so bad in 2009, we didn’t even come close to qualifying for anything so I am pulling for RMFT to win the state championship!

I pretty much do the same thing for exercise every day. I get up and go to the gym and work out on the elliptical. You may find this shocking, but there are times when this becomes a bit monotonous. If our workouts get too mundane, sometimes we quit because they aren’t maintaining our interest any longer. I know that this happens to me. When I feel like I can no longer stand physical activity that is confined to a machine, I will use one of my non-exercise days on a weekend and access my inner child. Doing things outside that you did as a kid not only burns calories, but you have a fun time and I guarantee you will be sore the next day.

I will give you a few ideas that I’ve tried.

First, you can play catch. My brother and I go out in the front yard from time to time and throw the football. He throws it way too hard but I work out my arms and it’s great cardio because I’m running all over the place when I don’t catch it. You can also play catch with baseballs or have a one on one basketball game. Any backyard sport is fun...especially in this crisp weather. Don’t worry about it if you are terrible either...that’s not the point. Cassandra and I used to go and try to play tennis. We were terrible. We missed all the time, had the most embarrassing thrift store racquets and cheap balls, and we annoyed the crap out of the people next to us because we kept hitting balls on their court...but we had a lot of fun and it was great exercise. The point is to either try new outdoor sports you never played or go back to sports you used to play as a child.

The second idea is more for the summer but has a similar affect. You need to go to Wal-Mart, swing by the grocery side and buy some Dawn Liquid Dishwashing Soap, then head over to the toys and buy a Slip-N-Slide. You will probably need to do this in the backyard with people you are very comfortable with because if you’re like me...the thought of someone seeing you leap into the air in a bathing suit and landing hard on the ground isn’t exactly comforting. My big ‘ol butt got out there and did this with my family a while back and I was so terrible at it. I would take a running start and as soon as I got to it, I would just fall on my knees and land like a lead balloon. It was so funny and fun rolling around a soapy, plastic tarp and I felt like I had done 50 squats the next day.

The last idea is rolling down a hill. I posted a picture of me doing this a couple years ago. You need to find a nice, tall hill (preferably one not close to a road), lay down and just GO! The workout doesn’t come from the ground destroying your rib cage or the grass digging at your pants or the sticks poking you in the eye...it comes from the trek back up the hill a thousand times because it’s so much fun. I loved it! Actually, I kind of want to do it now...oh well. 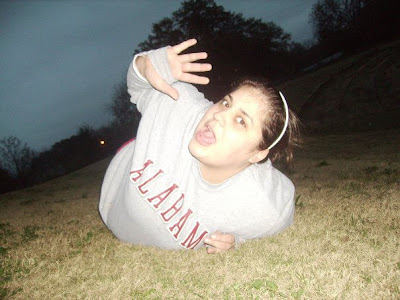 I think you catch my drift. Exercise sucks. This is something I truly believe. If couch sitting were an Olympic sport, I would be a gold medal winner (don’t write that down...I’m not sure but I don’t think I made that up). There are things however that you do from time to time to shake it up a little...just give them a shot.