I know...it’s been a long time since I last blogged. It was a CRAZY week last week. I had jury duty. It lasted all day. There were two days where we didn’t get any lunch and stayed until almost 6. Luckily, I have to go like half a day on Thursday and then I’m completely done. *KNOCK ON WOOD!* Anyway, when I wasn’t at jury duty, I was at work and when I wasn’t at work I was finding a new place to live. On top of that...work is incredibly busy these days. So, needless to say, I didn’t have time to blog.

As you read above, I am looking for a place to live. Jordan is moving to Birmingham and we gotta get the heck out of our icky, big house. Me and Cassandra lived together before so the two of us are apartment hunting. Even though our current house might be giving us black lung, it is quite cheap. We have re-discovered the expenses of moving. Oh well, I guess I will move pretty much every year until I buy a house for myself and with money being so tight and student loans looming...the chances of me being able to juggle a house payment anytime soon are not very good.

So-The Saturday before last, I had weighed and was down 49.8 pounds. I have been waiting for weeks to lose 50 so I could put a new picture up and celebrate the accomplishment. I just KNEW that when I weighed in the day before yesterday that I had that .2 of a pound in the bag. I even wore a skirt in 40 degree weather so I wouldn’t have pants weighing me down. I step up on the scale and with a dejected look on her face, the weigh-in lady told me I was the same. I had lost no weight. I mean...SERIOUSLY! I couldn’t have lost .2?!?!?! I was VERY disappointed. I know I shouldn’t complain because I didn’t gain and I have done great but I had my hopes up. I know that I will face plateaus and ups and downs, especially during the holidays, but it feels like everything is in slow motion right now. I decided that I would bump up the elliptical routine and go 35 minutes instead of 30 and I will be VERY strict this week so when Friday rolls around (I’m weighing Friday instead of Saturday because I am going to Chattanooga this weekend to see my family) I will get rid of that .2. I am hoping to really get out of this slump after the first couple weeks in January so I can look and feel even better by March when it’s time to go to Paris!

You may have heard that Mark Ingram won the Heisman Trophy. It was such an honor and treat to watch him (on TV of course) accept the award. It was Alabama’s first and I was so proud! I want to go to Pasadena so badly to cheer Alabama to their 13th National Championship but my chances are dwindling more and more each day. I will watch it from TV as if I’m there though. 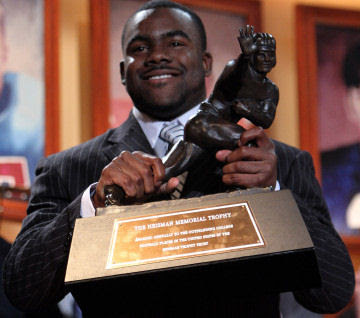